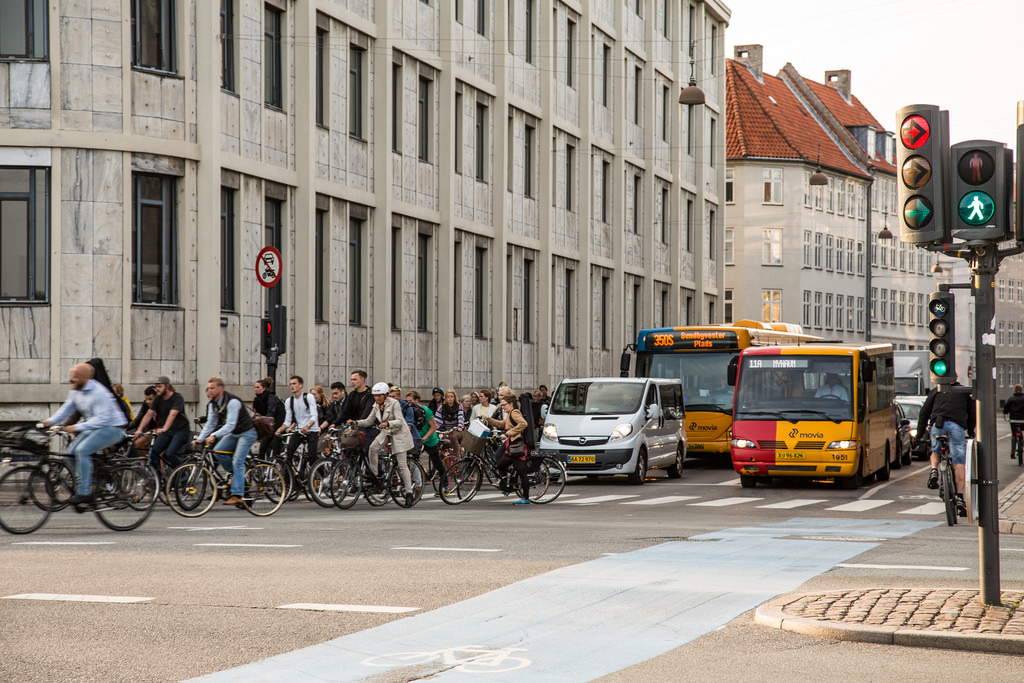 What can Detroit learn from Copenhagen about bike lanes? A Q&A with an international bike expert

In recent years as the City of Detroit expands its network of bike lanes, it has called on an international mobility planner designer to assist with permeating bike culture throughout the city.

Mikael Colville-Andersen, a cycling advocate and founder of bicycle urbanism firm Copenhagenize, is based in Copenhagen, Denmark, perhaps the most bike-friendly city in the world. (“More bikes than people” just might be an understatement.) Colville-Andersen advises American cities on adopting European attitudes toward bike culture, so when he got the call from Detroit, he jumped at it.

Colville-Andersen says he was attracted to Detroit because of the grassroots cycle advocacy that was already in place as the bike-lane network branched out, citing Slow Roll as a prime example. “We were asked by the Planning Department to include a lot of African-American people — not just the white dudes on bikes.”

But in addition to his work as a planner, Colville-Andersen advises on how to help cities navigate culture understanding of bikes — especially since American cities are far more car-centric than European ones. He’s heard the complaints from every city’s residents about bike lanes, but his philosophy is simple: “As soon as you put it in, then people will shut up. And that’s what Detroit needs to do on so many levels.”

We sat down with Colville-Andersen to discuss more about the American resistance to bike culture and how it relates to us here in Detroit.

Here in Detroit, the criticism is that new bike lanes go hand in hand with gentrification. Do other cities have that same attitude?

Take a number. The cities that are pushing back against bike lanes — every single one that’s now getting them. It’s an interesting conversation in America. All these cities around the world are getting bike lane infrastructure, but in the States I hear a lot of “it’s gentrification.” But then also in the States, people say “I don’t want a bike lane past my house because poor people will come and steal our television.” It’s really an interesting mix of opinions about bike lanes.

In Denmark, a very egalitarian society, for us bike lanes are just leveling the playing field. It provides us with fast, affordable transport. It’s more of an uphill battle in a city like Detroit, of course, with your history of car-centric planning but for us, bike lanes are for everybody. A low-income African-American and some fancy white dude downtown, they can all just ride their bike. For us, it equals everbody — it benefits everybody regardless of income or race.

It’s kind of hard to understand sometimes. All these people project this other stuff onto it, but it’s a misconception. I don’t want to use the word ignorance because that sounds super negative, but you don’t know what it is, man. It’s just transport, man. I’ve seen a bicycle map of Detroit from like 1896 — an amazing network of roads that were paved because of the bikes, paved first before the cars came. That’s where the American highway system came from.

"Everything in Detroit is 20 minutes — you have the greatest flowing traffic in America. I think if you take away a couple of lanes to make a bicycle infrastructure, I think you’re OK."

How did Copenhagen become the standard for bike lanes?

Every city in the world was Copenhagen for decades. For example, 100 years ago, 20 percent of the population of Los Angeles rode bikes. We have this short-term urban memory loss, we kind of forget that stuff. Copenhagen — what happened in the ‘50s and ‘60s all over the world was we just put cars into our cities, and we made the same mistake in Copenhagen. We in the ‘70s with the oil crisis were hard hit, (but) the bicycle had not totally disappeared like it had in American cities. The government said “this is a good solution for this crisis,” and then it just started to snowball. It’s an efficient way to move a lot of people through the city. How many people can we move most efficiently, and this was that solution. Scandinavian pragmatism, no drama, no big waving the banner of the bicycle, no “we’re going to save the world with the bicycle” — no, we’re just gonna make sense.

Are American politicians too conservative when it comes to advocating for bike-lane infrastructure?

Normally when we talk about bikes and infrastructure, it’s a city issue, right? In my work around the world, I don’t really talk to any national or federal politicians, thank God, because it would be really boring. City people have their fingers in the dirt. There was one American senator or congressman, he said “we all know what we have to do by putting bicycles in the cities, but we don’t know how to get re-elected if we do it.” And that’s kinda true, but it’s kinda fear but not reality. We’ve seen it snowball around the world; mayors that would not touch bikes, not even talk about bikes, are now going “ah, I get it.” If you’re living in Cincinnati or something, you don’t have to look to Copenhagen anymore, now you look to Minneapolis. They’re doing it —the best bicycle city in America, now out of nowhere.

The politicians are getting there, I see the momentum continuing. The more and more cities that do it, the more cities that are going to follow. It’s like the classic European football system — you got the Super League, the second division, the third division, the fourth division, so cities are aligning themselves now. There is a healthy competition to be a little bit better than the city down the road that’s always been competed against in all these other issues. Weird cities are getting it — like Missoula, Montana. Who knew? We’re going to see it continue.

Every city in the world that has gone from zero to hero in the last ten years for bikes really has established the bicycle again. Really, every single city I’ve identified, it really is top-down. My activist friends and the advocates hate me for saying that — they’ll push bottom up, but it’s true. It’s a top-down decision. The more and more politicians that are doing it inspire politicians in other cities. And unfortunately — I hate that, I want people power. I want that pushing up and smashing through the ceiling, but at least it’s happening.

There is momentum among politicians, but in the States it’s kind of still — you had an extra 20 years on us with car-centric urban planning. You really established it quickly where, even if you started in the ‘50s with Europe, it still took time for us to really phase out our trams and establish the cars in the ‘50s and ‘60s. You guys may even have 30 or 40 years on us, right? So I get that it’s a really difficult concept. Even just to put in a good public transport with American cities — it’s happening now, you know, Denver’s got a train to the airport, you guys (Detroit) have a (laughs) tramway downtown. Dallas has a new tram. I’m positive and optimistic, but you guys have a little bit more of a battle. Good luck with that shit. 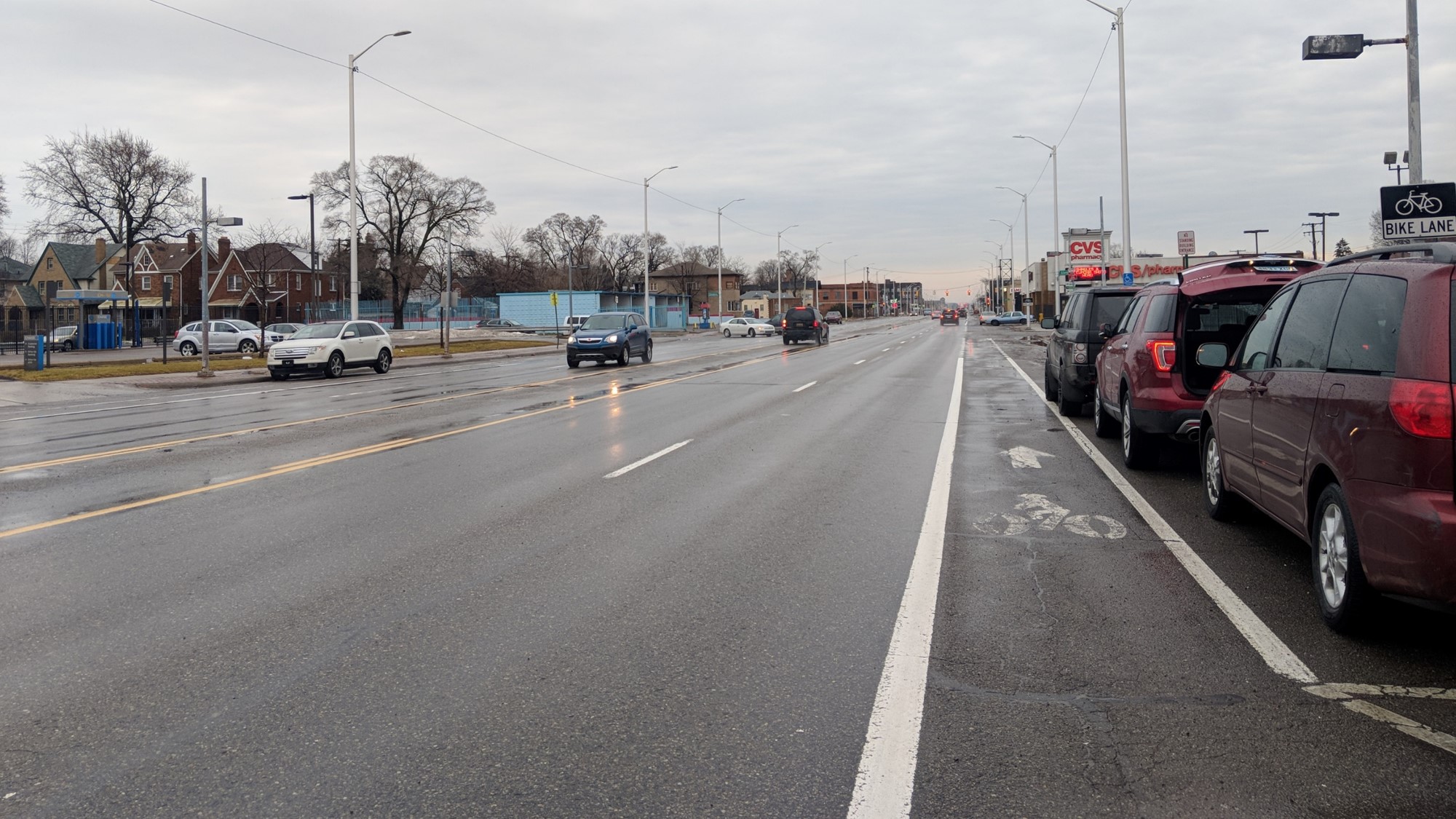 Many American cities have bike-usage percentage in the single digits. A frequent thing we hear in Detroit is “taking away a whole car lane for one person in a bike lane.” How do you justify that?

I always say that zero to five percent, that is the hard slog, man. That is the difficult task (to justify bike lanes). Five to fifteen? Five to thirty? That’s easy. Once you have five percent of the population cycling, you see them. You see them riding bikes. And this whole concept of “safety in numbers” — a motorist driving down Jefferson for 20 years, and then all of a sudden, boom, there’s one bike. OK, fine, but then there’s ten bikes in the next year, and then they start saying “aw, shit, these bikes — before I turn right, one of those damn bikes might be coming.” So that increases safety and awareness. It’s planning for the future.

You know, when Detroit was laid out, the original plan for Detroit was pre-automobile. a bizarre plan for a city at that time, that whole radial system. People were probably standing there back then saying “what the hell do we need these roads for? Nobody lives here?” They were planning Detroit for the future — the grand future.

Everything in Detroit is 20 minutes — you have the greatest flowing traffic in America. I think if you take away a couple of lanes to make a bicycle infrastructure, I think you’re OK.

When it comes to public transportation in general, what is Detroit doing wrong that we could be doing better?

It’s not really Detroit’s fault that you this weird system that you have all of these other cities around and you’re all competing, and there’s that one mayor in another city outside of Detroit who trashes Detroit all of the time |LS|Editor’s note: This is a ilkely reference to Oakland County Executive L. Brooks Patterson.|RS|, and so you have that disconnect between the city and the region. So the transport department had this grand plan for public transport to clean all that up, well, that just fell on its face because no one could agree |LS|Editor’s note: RTA, remember that?|RS|.