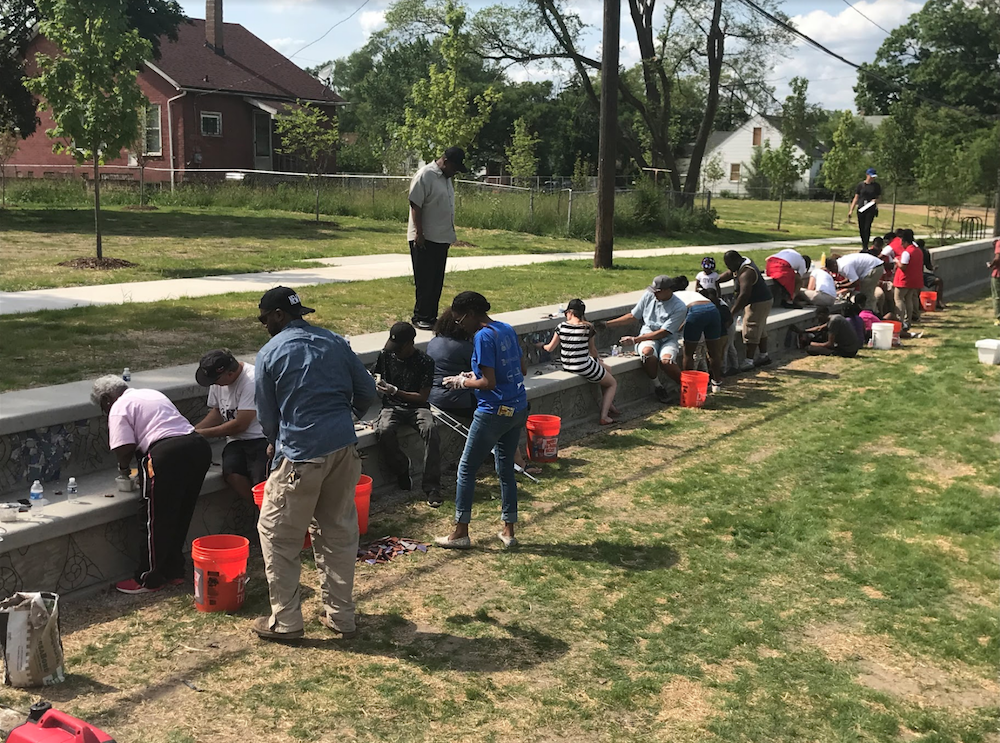 The Hubert Massey-designed work has some help from neighbors

The re-christened Ella Fitzgerald Park is getting some new public art.

Designed by famed muralist Hubert Massey, volunteers from the neighborhood are getting a chance to lend a hand to the piece’s construction.

“It’s about bringing communities together and getting people to participate and interact across the board,” Massey tells The Neighborhoods. “Part of this is about people reinvesting in the community.”

The mural features hands of different colors against a blue background to represent the different people living in the Fitzgerald neighborhood, which is in the midst of a sweeping revitalization project powered by the Strategic Neighborhood Fund.

Massey said the mural will be constructed in a similar fashion to a similar mural he created, 2010’s “The Spiral of Life,” in Southwest Detroit. The clay used to create each tile is handmade from a slab that is heated at 518 degrees Fahrenheit before being cut from the melted clay.

“Art is a type of thing that reaches beyond any type of economical level,” Massey says. “It allows creative people in the community an opportunity to get in the process of change.”

Volunteers of all ages were able to get their hands dirty with the project by gluing tiles to the wall in order to create the piece. “They’re involved, they’re apart of this, they’ll remember this and they’ll protect this artwork,” Massey said.

Among the volunteers was Barbara Epps. The Detroit Police Department retiree has lived in then Fitzgerald neighborhood since 1992, and is an avid volunteer in the Fitzgerald and Bagley communities. She helps with getting messages and key alerts out to her neighbors.

She’s also one of the inspirations behind one of the colors used in the mural. “She put this yellow down in the actual drawing and we call it Barbara Yellow,” Massey said.

Epps lives right across the park and said she’s glad she can walk right over from her home. “I think it’s beautiful,” she said.