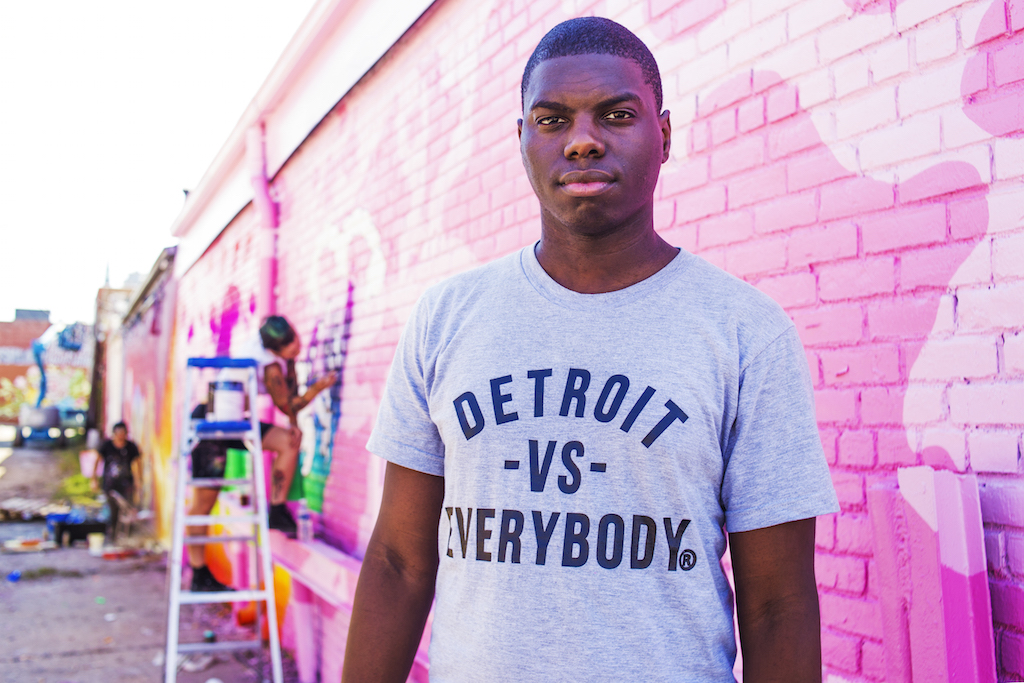 Three times a week, Viranel Clerard starts his day at 5 a.m., where he gets up and photographs art around the city of Detroit. “My goal is by the first snowfall of this year is to get 3,000 murals up on the blog.”

“It’s a lot of murals to get up right now. The goal is to have all murals documented on the blog.”

Clerard, 23, manages Clerard.com, an ad-free site dedicated to chronicling and cataloguing Detroit’s art scene, from street art – his primary focus – to gallery exhibitions, along with interviews with artists and personal snapshots. The goal? Become Detroit’s one-stop shop (and in some circles, it already is) for artists curious about Detroit, as well as where consumers can track the city’s creative.

“Before Basquiat was what he is now, he was a street artist that went by SAMO,” he says.  “Imagine being able to see all the SAMO pictures all around the city before (the artist) gets big.”

On the site, murals are sorted by neighborhood. (“In Regent Park, there’s a guy who owns, he started going to blighted houses and boarding them up and painting motivational things on them, and there’s about 10 houses like that,” he notes on artist trendlines. “The trend is to move into the neighborhoods.”) There’s page of art exhibitions at Inner State Gallery, the Museum of Contemporary Art Detroit, N’Namdi Center for Contemporary Art and more. He also documents artists during the creative process, following them through until the finished product.

Clerard considers himself to be a tastemaker on the scene; he’s a regular at galleries and shows, pals around with traveling artists who have reached out for consultation, and has a who’s-who of I-knew-them-befores (“I was in the studio with DeJ Loaf a few times,” he remarks). But in a city whose art scene is robust, but coverage can be thin, his work is increasingly important.

“I’ve never taken a formal art class, but honestly, I am confident that I’m kind of a post-grad art student,” he says.

Clerard’s interest in art started young. He spent his earliest years on the east side in the Von Steuben area. “My neighborhood growing up was weird. Seven (Mile) and Hoover was rough…but there were a lot of auto industry retirees that worked at the factories, and just our block was well-kept.

Then you go a block to the left or a block to the right and there was a completely different environment. So my parents were like, you can ride around this part of the street, but not past,” he adds.

He attended Von Steuben Elementary, which, at one point, housed all 12 grades. “I was in elementary school walking in the same hallways with 12th graders, which was a very weird environment.” His family moved to Eastpointe, where he then attended East Detroit Public Schools.

There were no art programs in his Detroit school, and hardly any in the East Detroit schools, he says. “Schools just don’t focus on the arts until very late in your high school career, until it’s like “hey, just take this as an elective.’”

“Being a Detroit transplant going to a suburban school, I was one of the first black kids going to my school. I was pretty outcast; I didn’t fit in at all. I had a lot of issues with that,” he says.

Art, and consuming it online, became an escape. Clerard maintained ties to the eastside despite being on the other side of Eight Mile, hanging with a loose group of hypebeasts into Kanye West (“When I first went out to Eastpointe was when ‘The College Dropout’ dropped,” he notes), fashion, photography and the intersection of it all.

"New York’s done with that. I think it’s just too expensive; a 20-year-old just can’t go out there and make a name for themselves. They’re going to come to Detroit.”

He started a blog his freshman year of high school; school and other responsibilities got in the way. Then he started another one his junior year, which eventually evolved into the site he maintains now. “One year I got about 20,000 page views and it really kicked off for me, so I kept on doing it,” he says.

“(I’m) 100% self-taught. I taught myself how to write, I taught myself how to interview, I taught myself everything,” Clerard says. He picked up interviewing and writing skills by voraciously consuming local media, having RSS feeds set up for each of Detroit’s news sources since he was in middle school. The camera skills came from picking up a DSLR, but “nowadays my style of shooting is so quick and rapid, I just use my iPhone.”

Clerard moved back into the city, eventually settling in Corktown. When not documenting artists, he occasionally takes kids and teens to art shows and museums, helping expose them to what’s possible. “Kids need to learn in schools what’s fine art versus just graffiti.”

It’s an important distinction as City of Detroit officials (Ed.: Yeah, this author’s co-workers) begin to open up to conversations about opening opportunities for more street art. But not only that, Clerard says, Detroiters themselves.

“I try so hard to get people to come out to art galleries and art shows; I’m like hey guys, come. It’s unlimited free drinks!” he says. “But if you’re any type of artist, writer, journalist, someone will be there to help you network. But no one wants to show up because they associate it with…what they call being whitewashed.”

Clerard notes that sometimes he’s “the only one” (read: the only black person) at a lot, though not all, art events. “I don’t think I’ve gone to an art show outside the Red Bull House and seen more than five black people there,” he says. “Even though it’s awkward…I have to be there. I have to make my presence known.”

That’s why the blog is important. “That’s for people that live in the city to say ‘oh wow, this isn’t just some art snob, this is an actual kid that’s just like us, these are actual friends, they look like me.’ Art is inclusive.”

It’s his hope that the next great Detroit artist won’t have the same hurdles he’s had. During our interview, he notes the new arrival of Detroit Public Schools Community District superintendent Nikolai Vitti and hopes the new chief would consider boosting the district’s art offerings. “If Detroit is going to be a mecca of art for street artists, it needs to be a place where a lot of world-renowned artists emerge.”

Until then, Clerard knows the art scene here will continue to flourish anyways. “New York’s done with that. I think it’s just too expensive; a 20-year-old just can’t go out there and make a name for themselves. They’re going to come to Detroit.”