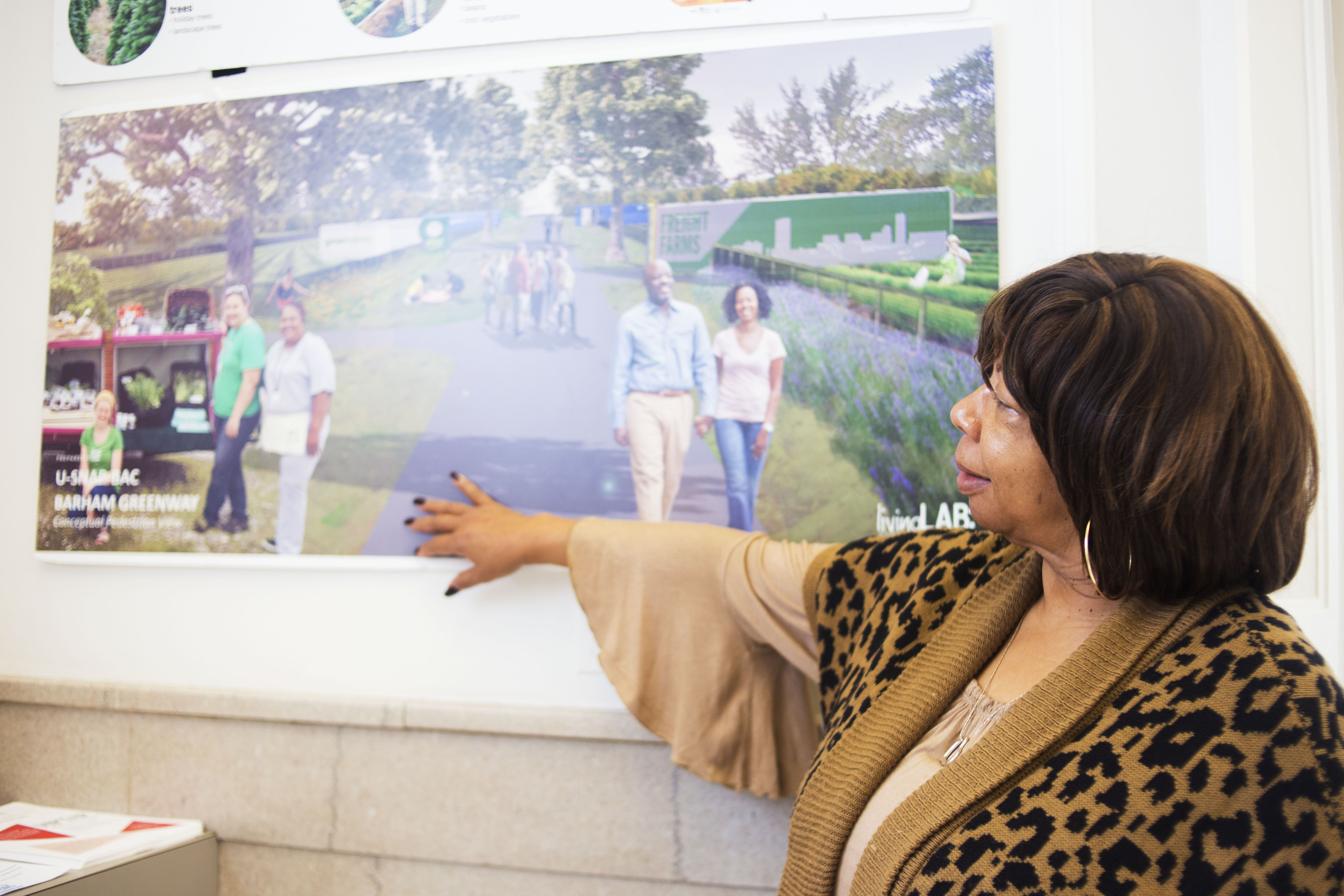 How U-SNAP-BAC plans to transform five blocks of Morningside

A public 'farmway' is in the works for these eastside residents

From her corner house a block off East Warren Avenue, Michelle Allen says she has helplessly watched the decline as her neighbors abandoned their houses, squatters moved in, and properties were torched or torn down in the past 16 years.

Today, the street, which looks more like an alley with the backs of houses and garages from Beaconsfield facing it on the east side, seems to be a preferred illegal dumping spot. From the overgrown vacant lots on the west side of the street and all over the street itself is junk — everything from old tires and televisions, to a pulled out sleeper sofa with its cushioned scattered here and there, piles of scrap wood and crumbled sheetrock. When it’s cleaned of debris, within hours, new piles of trash and debris appear.

“It’s just terrible the way it is now,” Allen says. “They dump over here day and night. They even dump dead dogs. I dream that hopefully, one day, it will look good again if they trim the trees, cut the weeds and stop the dumping.”

Linda Smith, executive director of U-SNAP-BAC, a nonprofit community organization with a reputation for building affordable housing, and helping residents improve their homes and retain homeownership, has a similar dream and for years has been trying to figure out how to stop the dumping and beautify the area. Earlier this year, U-SNAP-BAC was one of 17 nonprofit organizations that won a total of $2 million in Kresge Foundation grants for community improvement projects. Now, she’s got a plan and the funding to make the difference to the five-block strip on the street.

After surveying area residents, she discovered they wanted a safe place for their children to ride their bicycles and a place to walk their dogs. They also desired more accessibility to fresh produce and somewhere to grow it. Her plans to begin the transformation of the mostly vacant half-mile stretch of Barham Street into a public greenway and “farmway” will fulfill each of those goals.

“Farmers, including someone who is looking for two acres to grow grapes, will lease the land.”

She also learned residents wanted urban gardens, but were concerned about going through the Detroit Land Bank Authority, Detroit officials, red tape or bureaucracy to do it. They just wanted to be able to lease a plot of land to grow some vegetables.

“The land has been vacant for 20 years, and it appears there are some environmental problems, but with growing, we can grow in boxes,” she says. “Farmers, including someone who is looking for two acres to grow grapes, will lease the land.”

She hopes to break ground on the greenway by next spring, but she has to complete the first phase, which included hosting focus group meetings to see if people wanted it, applying for a $150,000 grant to acquire the land from the Detroit Land Bank Authority and other steps.

“Our goal is to get the Barham Farmway up and running; that will take another three to four years to complete,” she says. “We are not entertaining any new housing; it doesn’t make sense to start trying to do something new when there’s so much more we can do to existing housing.

“We’re doing a lot to help families facing foreclosure to stay in their homes through Step Forward Michigan. We received funding to help 106 families stay in their homes that needed less than $1,000 to save their homes, and we just helped give grants of up to $7,500 to 45 homeowners for home repairs. And we have to do some work to stabilize the commercial strip on East Warren Avenue. So we’ve got a lot of work to do.”

Allen, who grows cucumbers in old brick porch columns in the front of her house, and bell peppers, squash and other vegetables in her backyard, says she will be glad for any improvements made in her community.

“Those will be so good,” she says. “Really good. I will be so very happy.”