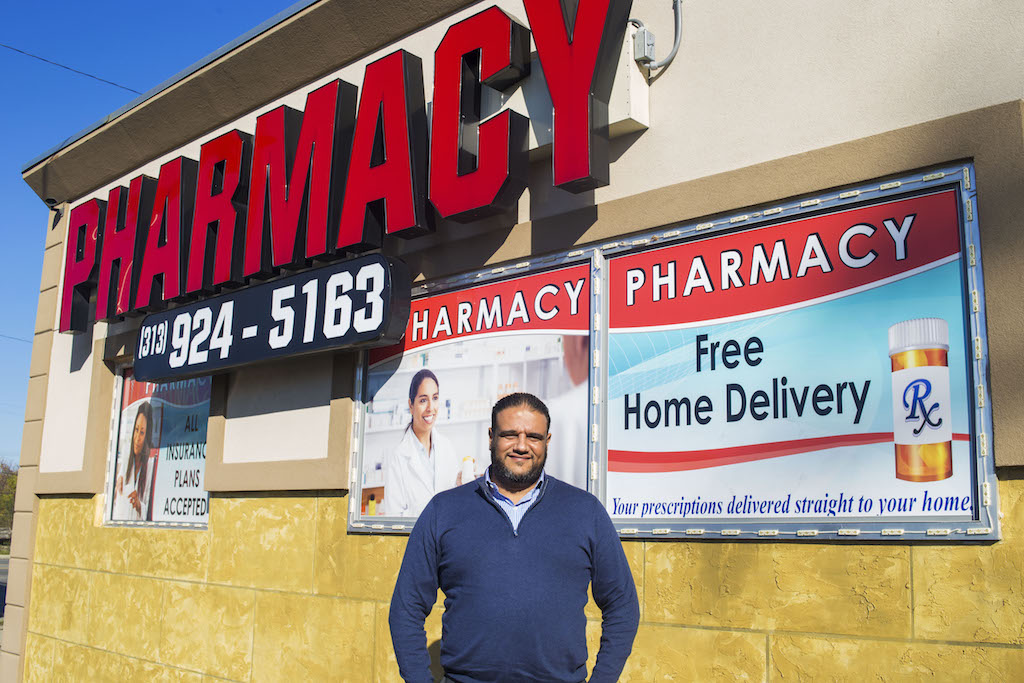 I first met Nebill Abdulla passing out swag and business cards at Hotter Than July in Palmer Park last summer. For the unfamiliar, Hotter Than July is an annual weeklong celebration of African-American gay pride, with its highlight being a Saturday picnic in the park. To see a thirty-something Arab-American man mingling among queer youth and gay elders struck my curiosity, so we chatted.

Turns out, Abdulla supervises a chain of pharmacies in the area – two on the east side, one on the west side and one in Highland Park – and was there to not only support some of his customers, but emphasize what a pharmacy can do for the community it serves.

“I have HIV patients, so I’ll do whatever I can to support that community,” Abdulla told me later. And not just HIV patients, but also lupus patients. Cancer patients. Whatever a patient may need treatment for, Abdulla will find a way to come from behind the counter.

It’s a customer-service method that, frankly, is rare to hear about in Detroit because of a long and complicated history between two demographics in Detroit that always have been at odds: the black population, and the Arab one. Prior to writing for The Neighborhoods, I wrote an in-depth feature on why the relationship is complicated. Long story short, there is misunderstanding on both sides rooted in the respective histories (and a heavy dose of white supremacy) of both populations.

“It’s there,” Abdulla says about the ongoing tension. “There’s no need to lie and act like this doesn’t exist. (But) if you are a business owner in that neighborhood you better figure out a way to get over your differences and start treating people better, because you are benefitting from that neighborhood.”

Abdulla fell into the pharmacy business by accident. A first-generation American, his parents emigrated from Yemen and settled in Dearborn, where his father worked for Ford Motor Company and his mother tended to the home. “My mother and father always taught me respect your elders,” he says.

His family, and extended family, tried a number of businesses to varying success. A pizza shop failed, he said. Real estate didn’t pan out. But an associate of his invited him to manage a pharmacy on the east side. Abdulla, the only of his five other siblings who didn’t finish college, gave it a shot, and was tasked with delivering prescriptions to senior-citizen homes.

Warm receptions from older black women changed his perception of the city, he says. “Those ladies changed everything on how we did business. The way they accepted us and trusted us, it was a huge honor to me.

“It’s something I did not see coming…it became a huge list of grandmas and grandfathers, the stories, the experiences, the people I’ve met I’ve become so close to them,” he adds.

"The only person that’s better than them is God. After God, everybody else, we’re all equals."

In the last decade, Nebill went from assistant to managing the four pharmacies in the Wrigley’s Pharmacy portfolio, now anchored by the Highland Park location. And since then, he’s also become a public face of the company: Sponsoring kids’ sports teams, guesting at weddings of patients’ grandkids, and perhaps the sadder duty of attending funerals for some of his older clients. (“I never know who’s more sad,” he says.)

In many cases, Abdulla says, the stores aren’t clean and the employees aren’t friendly. “The standard in Detroit is very low. People just walk all over people,” he says, adding that it’s even a bit hypocritical. “We come from the Middle East. It’s not exactly Beverly Hills.

“I have a lot of colleagues in this business that say ‘what’s your secret?’, and I say ‘there is no secret.’ I’ve never sat down with somebody and thought I’m better than them,” Abdulla says. “The only person that’s better than them is God. After God, everybody else, we’re all equals.”

To be clear, Abdulla is not an anomaly. “There are lots of talented angels here,” he says. “We just gotta figure out how to all sit at the same table.”

Abdulla says several of his patients have his cell phone number, and he’s more likely to be called “Bill” instead of his full given name. “I want them to know I’m not just their pharmacist. I’m not just the person who tells you ‘your prescriptions are ready, come get ‘em, bye, have a nice day’.”

That in turn has built a loyal customer base, and has Abdulla thinking about expansion. The four pharmacies employ about 35 people, and each location has its own community liaison – a rarity for pharmacies. “As long as we never take a patient for granted, we’ll grow.

“I can walk with my head held high because the people of Detroit support me, and that’s real,” he says.