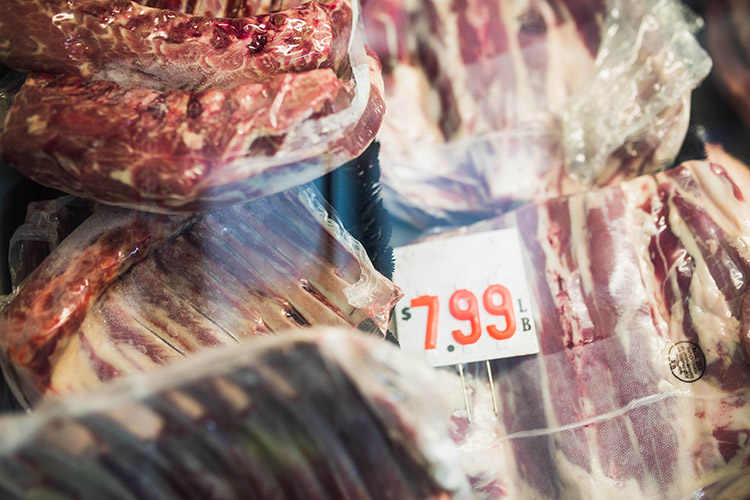 At Mr. Foods, a modest storefront in Eastern Market, there is big business in lamb chops.  The retail front is busy with people buying typical cuts of chicken in the back, but in the back, butchers are moving 100,000 pounds of lamb to local restaurants each week.

There we spoke to the head butcher Bill. He let us know what to look for in order to judge a great chop. “You really want to look for a USDA domestic lamb,” says Bill, one of Mr. Foods’ butchers. “The New Zealand lamb seems to be a little more gamey tasting, almost like a venison.”

Over the last few years, lamb chops – salted, grilled, and sold in individual cuts – have become a tiny, almost necessary addition to local menus in Detroit. It has moved from pricey entrée to toplining happy-hour specials. Some restaurants season them with rosemary or mint, the typical herbs that pair with lamb. Others serve them plain with a side of steak sauce.

There’s something to be said about the accessibility of lamb chops, and its marketability as quick bite that pairs with a brew or cocktail rather than a formal occasion with vintage wine. Call it another way of Detroit food purveyors making the unaffordable affordable. Like steak bites, its beef counterpart, restaurants are finding profit by chopping up lamb – the most expensive of sheep meat – and selling it by the ounce instead of by the pound. Fattier cuts are fine; Bill the butcher says to not fear of a cut with a lot of fat on it because it helps with flavoring.

We visited five restaurants across Detroit – Crab House Detroit downtown, the original Starter’s Bar and Grill on Plymouth Road on the westside, Southern Fires Bistro in Islandview, Pegasus Taverna in Greektown and Byblos Café and Grill in Midtown to sample chops and ask about their cultural significance in Detroit. 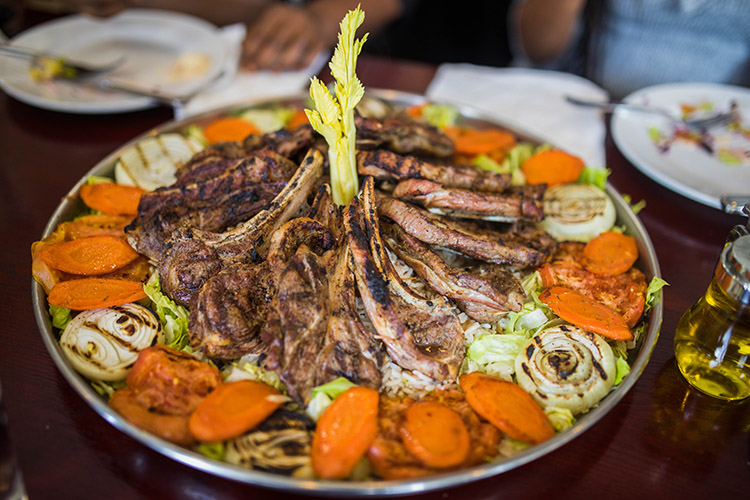 Like steak bites, its beef counterpart, restaurants are finding profit by chopping up lamb – the most expensive of sheep meat – and selling it by the ounce instead of by the pound.

“When I cook food, I do it from the heart,” says Brian Ahmad, owner of Byblos. Ahmad says people of Middle Eastern descent can’t have a proper family function unless lamb chops are involved, and that non-Middle Easterners are just now catching up with the wave.

“We are a big eater of lamb. We were raised eating lambs; we celebrate everything with lamb,” he said.

Lamb chops may be becoming ubiquitious, but how they’re cooked depends on the cuisine. Byblos serves theirs with sides of rice and veggies, staples of a Middle Eastern diet. He uses fresh cuts, and the meat falls off the bone.

At Crab House, which leans more toward Western palates, chops are served with a hearty side of garlic potatoes. They’re served tender and flavorful, but with a higher-meat-to-fat ratio, making it a popular item for the restaurant’s food-delivery orders across the region.

Damon English and his brothers, Charles and Eric, have been running Crab House for a decade, and isn’t shy about it. “We have the best lamb chops probably for the same reason we have the best food in the city,” English said. “We cook our food with love and integrity.” 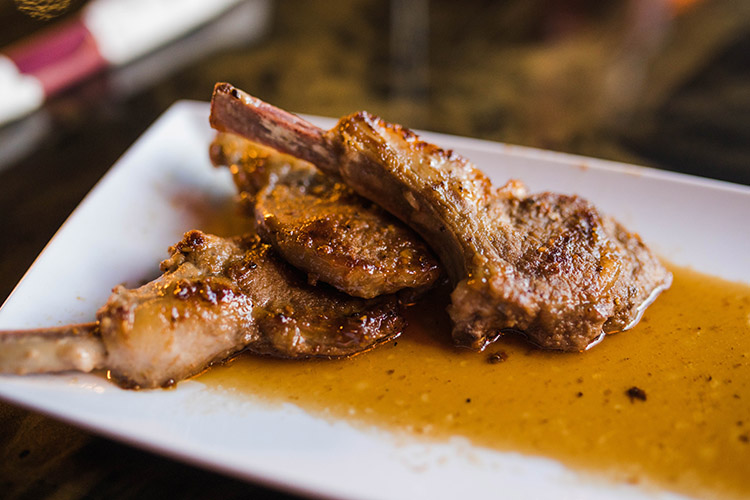 There’s something to be said about the accessibility of lamb chops, and its marketability as quick bite that pairs with a brew or cocktail rather than a formal occasion with vintage wine.

For $3 individual chops, in line with typical happy-hour pricing across the city, customers shouldn’t expect large cuts. But perhaps that’s part of the appeal: Do you want just a snack, or do you want to pile on? After a few $2 shooters, it’s up to you.

Starters Bar and Grill has been a family-owned business since 1977. Now under the management of Bob Saad’s son, Ali, the restaurant has expanded from its original location on Plymouth to two more locations in Midtown and Dearborn, and a recent new opening in Harper Woods. Ali Saad cooks lamb chops to a customers’ preferred temperature and brought out a plate of baked potatoes with plenty of fixings.

Starters serves lamb from New Zealand, and marinates it in a house-made “zip” sauce. “We buy |LS|our lamb|RS| from the same company that one of the biggest lamb buyers in the world purchases from,” Ali Saad says.

While still fairly new to many restaurants, lamb chops are nothing new in Greektown. Pegasus Taverna has had them on the menu for more than 20 years. We found that the longer the restaurant has been in business, the more traditional the servings (and the higher the price): Lamb chops here are only served as a full entrée, tender with more of a balance of meat and fat.

If one had to rank each of these places, Starters would come out on top based on the “zip” sauce alone. But despite the varying cuisines and settings, there’s commonality to be found across Byblos, Crab House, Pegasus and Southern Fires. But did we miss anyone? Tell us, Detroit: Where are your favorite lamb chops? 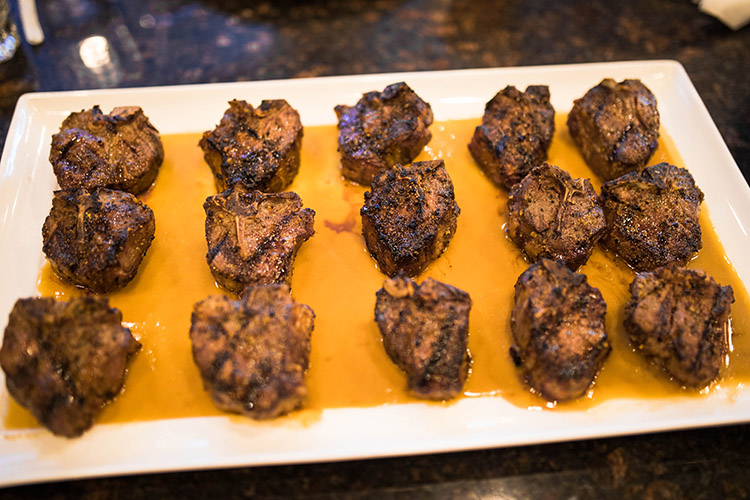