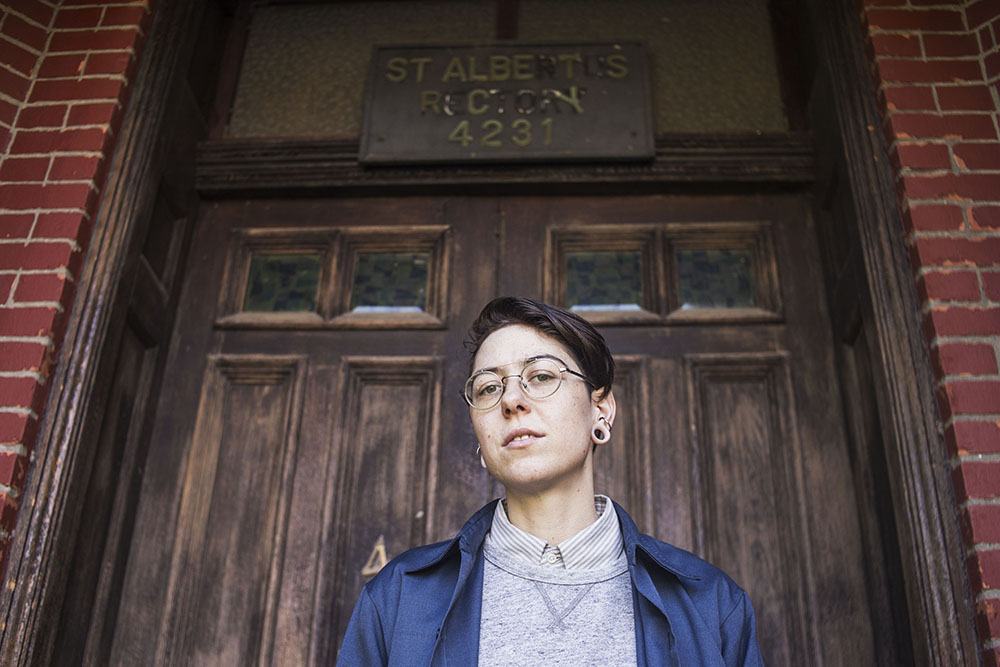 A ghost story from a haunted Catholic rectory outside Eastern Market

We visited this spooky house so you wouldn’t have to

The St. Albertus Historic Site on St. Aubin Street is imposing on a sunny day, but on the dreary Wednesday in October when The Neighborhoods photographer Cyrus Tetteh, storyteller Dorothy Hernandez and I visited, the Gothic Revival rectory was downright spooky.

Built in 1891, the red brick of the rectory stood out against the gloom, but the windows were dark. At some point in time, the outside trim had been painted white. Now, it was a mottled grey; cracked and weathered and ancient. Inside, the wooden floors creaked, stairwells and hallways were cast in deep shadow, and the air buzzed with the restless energy of spirits long departed.

And someone actually lives here.

Stevie Baka, 33, has called the St. Albertus rectory home for a year. They’re a member of The Polish American Historic Site Association, and oversee the grounds. The church, blocks away from Eastern Market and inactive since 1990, has since been turned into a historic site and Polish museum.

We started our tour on the second floor residences, where Stevie – who uses the pronouns they/them – opened a hallway door and started up the pitch-black staircase behind it. Everyone laughed nervously as we made our way to the attic, half-joking that we wouldn’t split up for any reason while touring the house. 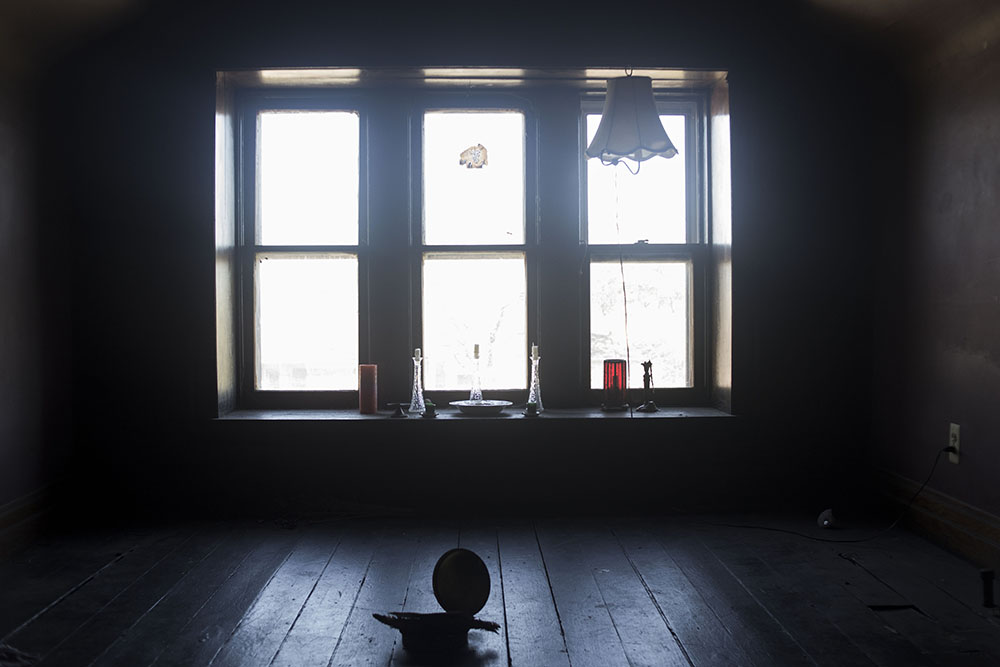 “I like this room because it’s really creepy,” Stevie said when we reached the top of the staircase. The front room of the attic was small, dark, and had a low ceiling. Watery light filtered through the attic windows, silhouetting the tapered candles set up altar-style on the windowsill. An old book of spells lay face up in the middle of the floor. Stevie self-identifies as a witch who enjoys doing “ritualistic, earth things,” and the attic is one of the places they practice.

After the four of us agreed that we wouldn’t end up being horror-flick stereotypes, Stevie led us through multiple dark corridors to the narrow, claustrophobic maid’s quarters. Using the flashlight on their phone, we made our way down the stairwell. The walls were exposed and hairy: horsehair plaster.

Stevie’s family has inhabited the rectory for decades. Their grandparents were married in the church across the grounds, and Stevie’s brothers also lived in and renovated parts of the rectory. Family history and church history go hand in hand here.

But while we toured, Stevie said they’ve always felt that they were able to see ghosts.

“I saw the same haunting, just from a different angle.”

When they were a teen, Stevie saw someone come out of one of the rooms they live in now and stand in the hallway. “That was when no one lived (on the second floor),” they said. “It was weird to me because I couldn’t convince myself that it was something else. No one lived in these rooms.”

Since moving back to Detroit a year ago after a stint in Chicago, Stevie said they were sitting in their living room when they saw the spirit again. “I felt and saw something in a robe come out of that room go out that door and go that way,” they pointed down the hall toward the grand staircase. Stevie assumes the ghost is a priest, because the room they occupy now was the priest’s room.

The first time Stevie encountered the ghost as a teen, it came out of their living room doorway and exited into the hallway. More recently they’ve seen the spirit coming out of their bedroom, travel through their living room, and circling back toward the grand staircase. They began to notice a pattern.

Intrigued, Stevie began researching different types of hauntings. “The things that I found is that usually there’s a ghost that haunts something: it moves throughout your house and you’re being haunted by that ghost,” they said. The other kind of haunting they found was similar to a time loop, a la Disney’s The Twilight Zone Tower of Terror.

“If something happened, it’s forever repeating in the space.” That’s the conclusion Stevie reached about their own haunting. “It wasn’t until I remembered when I saw that person come out of that doorway as a kid that I was like ‘That was the end of that loop,’” they said. “I saw the same haunting, just from a different angle.” 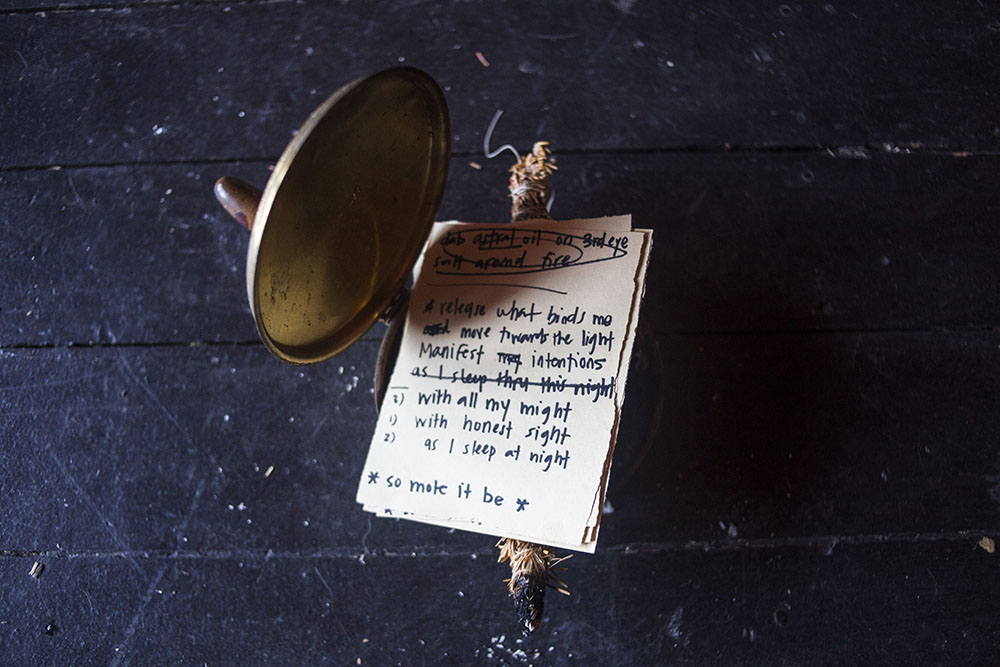 Stevie also theorizes that of all the people who have seen the ghost, none of them were men. “I don’t know if that’s an energy thing, because I’ve also been told that people who have wombs are more susceptible to energy so they can see hauntings in different ways,” they said. It didn’t sound entirely implausible; many horror films involving families have a mother and children who immediately sense a spirit, and a father who obstinately objects until it’s too late. If anything, Stevie’s theory made for great storytelling.

Their living quarters look like if a taxidermy shop, magic shop, and the Overlook Hotel had a baby: crystals and small taxidermy animals line a mantle on one wall, a ventriloquist dummy sits atop a china cabinet, clusters of melted tapered candles and their drippings sit on an island in the middle of the room, a framed Victorian death portrait of a small child is hung on the wall closest to the exit.

No haunted house story is complete without a visit to the cellar, and Stevie valiantly led us down into the darkness. The cellar was cold, damp, and exactly what you’d imagine a cellar built in the 1890s to look like. The walls were exposed brick, and the long hallway was lined with darkened doorways. A single, unshielded light bulb burned ominously at the end of the hall.

Stevie started down the hallway and disappeared into one of the doorways. The Neighborhoods team suddenly decided that we’d had enough investigating for the day, and were willing to stay close to the exit until Cyrus – camera in hand – followed after.

We’d broken the one rule everyone knows not to break: We split up.

Five seconds and many exchanged anxious glances later, our curiosity got the better of us. Dorothy and I hurried after them down the hall.

The room was windowless and lined with wooden shelves. Vintage glass bottles of pop (some of them still unopened) sat in dusty wooden crates, and old furniture sat in a corner. It was a storage room. The other rooms in the cellar contained similar items. Relieved, we explored a bit more, and finally returned to the main floor with the door to the cellar closed safely behind us.

Although Stevie agrees that the haunting in their home may seem odd to outsiders, they’ve embraced the creepy feeling. “I definitely lean into it, which is maybe why I like the rectory,” they said. “I kinda like it being my secret, special place. But, if a ghost expert wanted to come in and study, that’s something I would be into.”

Until then, they’re happy to play horror films as a scary fun get together with friends in the attic.

Click through the photo gallery below to experience what we saw at the St. Albertus rectory.