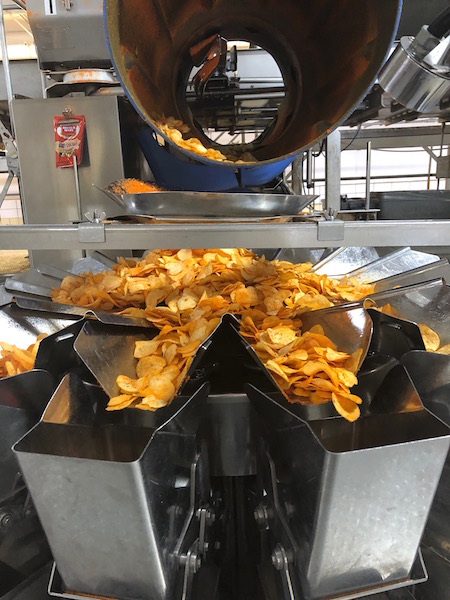 Get an inside look at the Better Made factory

Now in its 78th year, the iconic Detroit potato chip is as tasty as ever

For all the talk of innovation, mobility, smart this and smart that, there’s something to be said about visiting an old-school factory like Better Made’s facilities off French Road. There’s comfort in comfort-food production, because here at the factory, the old-fashioned way is still the best way.

You smell the hot oil — cottonseed oil, a recipe unchanged over the last 88 years when Better Made was first established by two Sicilian immigrants in 1930 — used to fry thousands of pounds of potato chips right before you even pull into the parking lot. Then you smell the ripe potatoes, the majority of which are — surprise! — grown in Michigan. (And you thought Idaho was the nation’s potato capital. Well, it is, but Michigan produces its fair share as well.) Then, right as you climb the stairs to a loftier part of the factory floor, the tang of hot barbecue seasoning stings your nostrils a bit.

Tours of the Better Made factory are increasingly rare, but we were able to finagle a walkthrough in advance of National Potato Chip Day and see just how Detroit’s hometown chip does it. More than 200 employees — about 75% of them Detroit residents who live within five miles of the facility, the company’s president Mark Winkelman estimates — come here to make not just chips, but popcorn and shoestring fries.

The old-fashioned way still works, as potatoes pour into a Rube Goldberg-like maze that starts with machine-filtering out dud potatoes, then moving along a conveyor belt where they are skinned. After they’re skinned, human employees sort out not-quite-ripe potatoes — they’re a bright green, like freshly cut grass — from those that will move on to be sliced or diced. Thinly sliced potatoes move to an off-limits-to-guests area where they’re fried in the cottonseed oil, then come out a different tube hot and fresh. That is, if they’re not sent upstairs along several other belts to be seasoned with the company’s signature flavors: Barbecue, Hot BBQ, sour cream and onion, salt and vinegar and more. The flavored chips are sent into a rotating tube, circling the future snacks a few times as seasoning sifts down and coats them. Somehow, they remain hot all throughout the process before being sent through another tube for bagging.

As long as Detroit exists, so will production of Better Made chips. But in recent years, output has grown. “Until four years ago, you could only get us here in Michigan but we’re starting to expand into other parts of the country, and we’ll always be on the lookout for the next flavor people are clamoring for,” Winkelman says.

As long as Detroit exists, so will production of Better Made chips. But in recent years, output has grown.

Trying out new flavors is tricky. There are three barbecue flavors on stands now: The original barbecue, introduced in the 1960s, Sweet BBQ (’s favorite) and Hot BBQ. But a honey barbecue introduced in 2016 is only just now finding its legs. A ketchup-flavored chip fell flat; so did a salt-and-pepper chip which Winkelman says he was really disappointed by.

Better Made is also finding itself evolving to adapt to consumer tastes. For years, snack food was defined as potato chips and tortilla chips. Now, The definition of what you call a snack is changing. Baby carrots in a bag are a snack — everybody wants a more healthy option,” Winkelman says.

“Granola bars are really exploding in the market right now. Even the snacks we’ve considered traditional, pretzels and potato chips and tortillas, a lot of people are looking for gluten-free — which would be very hard to come up with in a pretzel. Or organic; people are looking for GMO-free. We try to accommodate the bulk of our customers while making tiny steps into these other markets.”

Hence why the company produces its own branded popcorn but a healthier alternative under a different brand. But, X says, We know what we are. We are an indulgent snack. We know what we’re good at and we continue putting the bulk of our efforts into them.

In other words, don’t expect a formula or recipe change for Better Made’s original lineup. And don’t expect them to leave the city, either.

“|LS|The founders|RS| were Detroit residents and that’s all they knew. They knew this area. And they had friends and acquaintances that knew where they were. Our commitment to Detroit has never really wavered at all in that time, and I know the current generation-owner has no intention of leaving Detroit,” Winkelman says.

“Detroit’s been very loyal to us and we want to continue being loyal to Detroit, too.”