A 'generational' change for Park Players in northwest Detroit

As group prepares for final bow in North Rosedale Park this weekend, members past and present look back and reflect on what the group has meant to the neighborhood

After nearly 65 years at the Community House in North Rosedale Park, that space holds a lot of memories for generations of Park Players.

One of Carollette Phillips’ favorite memories was of her first show with the group. In 2005, she was interviewing to be choreographer of the Park Players’ production of “The Wiz.” She also brought her best friend.

Being a part of Park Players was a fun thing for families and neighbors to do together, she says. She got the role of choreographer while he landed the part as the titular wizard.

As a dancer her whole life, she took the role of choreographer seriously. She was nervous because it was the first show she was doing for the group and didn’t want to let them down.

Her best friend could “never get the choreography right, which would really aggravate me because everyone knows that I’m a task master … he would just get up there and do whatever.”

One night he decided to take his performance up a notch because his family was in the audience, she recalls.

All’s well that ends well because that marked the beginning of a 10-year run for Phillips who choreographed and directed several shows before embarking on a professional acting career, including a recurring role on Comedy Central’s “Detroiters” as well as a part in the cult movie “It Follows.” As for The Wiz and Phillips, they had a happy ending, too: the two North Rosedale Park natives ending up getting married.

There are many stories past and present Players look back on fondly as the group gets ready for final curtain call at the Community House, the space in North Rosedale Park where they have performed for the better part of six decades. This year they are performing “To Be Young, Gifted and Black” by Lorraine Hansberry.

Earlier this year, the Park Players relocated their spring production of “Sister Act” to the much larger Redford Theatre. About a week later they were in talks to move from North Rosedale Park to Old Redford.

Dave Calendine, president of the Motor City Theatre Organ Society, which owns and operates the Redford Theatre, says he’s always wanted to bring in live theater to the opulent space in Old Redford. Events typically center on the organ or classic films, but no live theater. When he heard the Park Players was looking into moving, “everything kind of went into overdrive” and that the theater needed “to make this happen.” 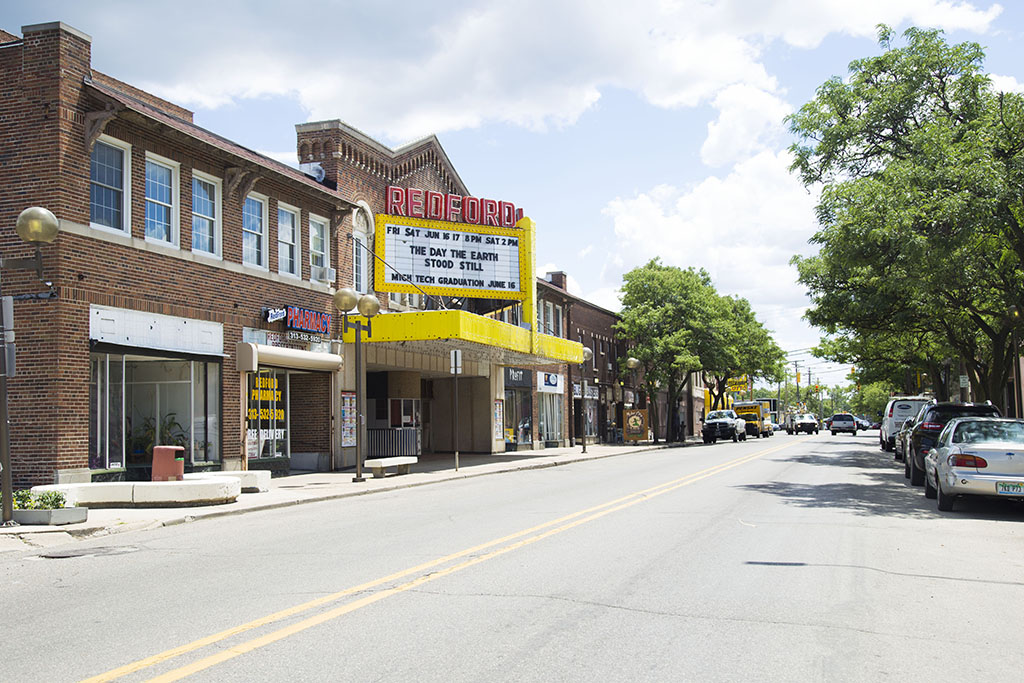 The main reason for the move is cost. When Tom Ridgway took over as treasurer of the Park Players in 2008, the yearly rent was about $5,800.

Since then, costs have risen significantly for both the North Rosedale Park Civic Association and the Park Players. The civic association embarked on a $1 million campaign to renovate the Community House. The Legacy Project entailed constructing a new welcoming lobby with handicap-accessible restrooms, an upgraded main hall with telecommunications device for the deaf, a new roof with solar panels and renovation of the parking lot. Phase two of the capital campaign includes public art.

Over the years, the rent skyrocketed for the theater group, going up to $14,000 a year. On top of rising rent, the Park Players were facing higher costs for securing the rights to do Broadway shows — the kind that typically brings in the crowds — and hiring directors and about $10,000-$13,000 would already be spent before any production costs, says Park Players President Archie Lynch.

After the Park Players started talking with the Redford Theatre that essentially cut their rent in half, according to Lynch, it was a deal the newly formed 501(c)(3) nonprofit couldn’t pass up.

The reaction to the move has been mixed, Lynch says. For people who have been in the group for upward of 30 years, “it’s a change they wish we weren’t making but they understand why we’re making it. It’s a happy and sad thing.”

“I think Park Players is coming up on what might be considered a generational change,” he says. “The older folks are starting to bow out … (and) the next generation is starting to come on and take over the group.”

As a former treasurer for both the North Rosedale Park Civic Association, which owns the Community House, and the Park Players, Ridgway says he sees both sides of the debate. “The civic association really needs the money but the theater group just couldn’t afford it,” says Ridgway, who always voted against the move when he was a member of the board.

“There are a bunch of older people – I guess I’m starting to become one of them” who are stepping aside to make way for the younger generation to take the reins, adding there are a lot of younger families moving into the neighborhood who have a lot of new ideas, he says.

He ended up resigning from the board last year because of personal reasons but also because the Park Players was going into a different direction that he didn’t necessarily see being a part of. They pursued the 501(c)(3) status plus the atmosphere feels more like “a business” than the fun and casual vibe of putting on a couple of productions with neighbors a couple of times a year, he says.

As a lifetime resident of North Rosedale Park whose family performed in shows, the Park Players was one of the things the neighborhood liked to brag about, he says. “We had our own theater group right in our own neighborhood.”

He also added he was “very disappointed and hurt that it’s moving.”

Tamara Kamara, who is president of the North Rosedale Park Civic Association and is also supervisor of the web team for the City of Detroit, says she quit the Park Players board to join the civic board in an attempt to salvage the relationship. The civic association countered by reducing the rent by a few thousand, and Kamara says, “my offer still stands.”

And she’s hoping to continue theater in the neighborhood. She’s trying to recruit as many Park Players as she can to stay on and reforming the entertainment committee. She would like to have a children’s show in the summer as well as a murder mystery.

"It's a whole family connection type of thing and also builds extended family. Where else in Detroit will you have a 21-year-old black guy sitting down and having drinks with a 71-year-old white man?"

‘You don’t have to be Denzel Washington’

Over the years, the group has fostered and cultivated the talents of thespians of all levels, ages and backgrounds.

There are the children who will never be actors, such as Kamara’s children who have all performed with the Park Players. Her son is 27 and in medical school. When he was in college he had to give a presentation with a group. One of his group mates threw up over the prospect of public speaking while another one repeatedly said he couldn’t do it.

Her son, however, had already performed in front of hundreds of people and didn’t understand why his group mates were terrified.

Park Players gave her kids the confidence to get up in front of people and to apply that to their daily lives, she says.

Other Park Players who started young end up going to L.A. to act professionally, such as Kristin Thomas. Her mother got her started in Park Players at a young age and by the time she was 11, she already had dreams of being an actress. She took a break from theater while in college at University of Michigan to study engineering. She even worked for a while as an engineer after college but she would think about how she wanted to act professionally. She performed with the Park Players in productions such as “Palmer Park” before working up the nerve to quit her job and pursue her passion. Being in Park Players “definitely helped me say, yes, this is what I want to do and not engineering.”

Park Players has also given nonprofessionals a creative outlet or revisit a hobby they had when they were younger. Lynch, who works as a computer software developer, did theater in high school and joined the Park Players after he turned 50 to see if he could still even do acting.

George Evalt, who dubs himself the oldest continuing member and has an engineering background, says that Park Players has let him try different things. A member of the group since 1975, he has had done nearly 70 roles from the Cowardly Lion in “The Wiz” to Edna in “Hairspray.” (Yes, that means he wore a wig, heels and a dress.)

As an INFJ personality type (Introverted-Intuitive-Feeling-Judging) in real life, when you give him a script, he has the ability to be someone else.

Phillips says with community theater “there’s something for everybody. You don’t have to be Denzel Washington.”

There are so many interesting connections and ties built over the years. For many Park Players, they have seen kids grow up on stage and then see their kids also on stage. The Community House has also meant more than just a building, and for many, they are sad about leaving that physical space.

It also helped her form lifelong bonds with people she still keeps in touch with to this day, she says.

When asked if that neighborly connection will be lost with the move, Kamara says, “I think so.”

You can’t duplicate the intimacy of the Community House, she says.

“It’s really an extension of our own home,” she says. “It’s a house we all share together … we eat together, we wash dishes together, we clean up together and we all do that in that house and I think that will be lost.”

No matter what side of the debate a Park Player is on regarding the move, the one thing they all agree on is that the group is about family.

“If you have strong families you will have a strong community,” Phillips says. “(With Park Players) you literally have generations of a family in a show. … It's a whole family connection type of thing and also builds extended family. Where else in Detroit will you have a 21-year-old black guy sitting down and having drinks with a 71-year-old white man? …  (The afterglow) literally connects different people. You even have some people who may have moved out of the neighborhood but they still come back to be in the shows and they make new friends with the people who live there now or they bring a friend with them. That is another way you build community because you end up becoming acquaintances or friends with people that you otherwise you may have never even hung out with.”