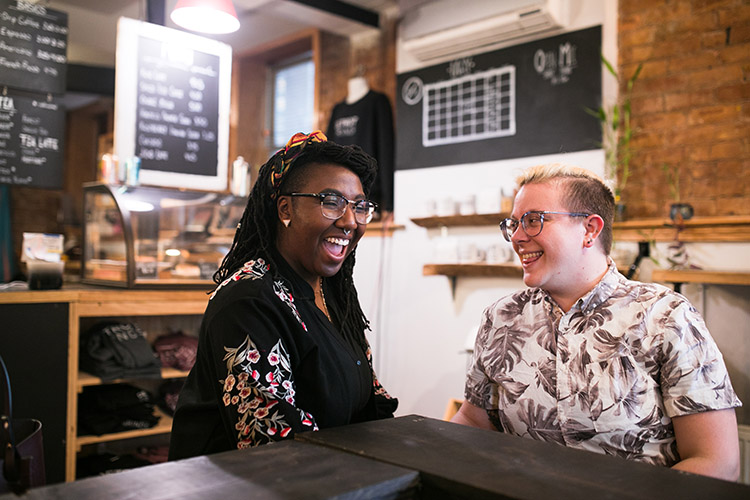 Moving was easy, but finding like minds can be a challenge

Throughout the month of June, The Neighborhoods will be featuring stories from queer residents across the city. Today, we’re talking to Carissa and Tiffany, who live in Islandview and are considering starting a family in the city.

Carissa: “I’m a transplant from all over the place. I was born in Texas, moved to Germany for a lot of my childhood, and then lived outside of DC for most of the time before moving here about six years ago. I’m an educator about to start teaching in Detroit as well.”

Tiffany: “I’m a Detroit native, East side. I moved away to DC where you’re from and then moved back and moved right back into the same neighborhood. …DC is amazing, and a lot of other cities are amazing, but DC changed a bit, too. It’s not necessarily the Chocolate City at all anymore. It’s very much the “caramel latte” on its most spicy day and so that was hard. It’s very expensive, but also I just wanted to be home. I find there’s just something about Detroit, there’s something about this place that keeps calling me back and it’s definitely not the weather. I know that for a fact.

The very things that set me apart here are just very common out there (on the East Coast.) Because I had been out there so long, I was in Rome so I became of the Romans. I was working seven days a week just to keep my ver very teeny studio apartment. That can get very hard because I had about a hundred jobs. But also if I’ma work that hard, I’ma work that hard at home in my city for my people.

I saw myself getting older and I saw myself wanting a family. The concept of raising my family away from my family? I don’t see that.

(Not finding a queer community is) my biggest frustration since being here. In DC we had a very very very overly organized black queer community that kinda suffered from the LGBT community that was more respectable. If you were a black femme kayaking and knitting enthusiast who has cats and is a Scorpio, there is an event for you weekly. And it was so organized that it was almost mainstream. But here it’s like catch where catch can. And also it seems like the queer community - the non-respectables - it’s very much around bars, drinking, and that’s it. So it’s really hard to, quite frankly, age as a queer person here.

Carissa: “Thinking of starting a family means that we have to intentionally find friends that, if they’re not on the same path that they’re actually cool with that and not meeting everywhere to drink. And going out late.”

Tiffany: “You wanna do stuff where you can bring your family and stuff. I’m not seeing that. I’m thinking people go out to the club, they meet their boo, and then they move to Southfield and then that’s it. Ferndale!

I was thinking we need to do some market research. The next time we’re at, I don’t know - Kohl’s, or something. I don’t know why we would ever be at Kohl’s. We could just walk up to someone who seems like vaguely queer and also has a little salt and pepper (laughs)…”

Carissa (laughing): “And ask them what they’re doing with their lives? That’s not market research, that’s accosting people and forcing them to be friends with you.”

On having children here

Carissa: “Like the hoops that we’re gonna have to jump through. Like, the one of us that doesn’t carry (the baby), the other one that has to jump through to be a legal parent. Or whether or not we’re gonna be able to foster based on discrimination in foster care agencies. Just so many things to think about that if we’d been somewhere like DC it would be less to think about, but also there’s give and take. Because this is home for you and it’s cheaper.”

Tiffany: “More broadly speaking, it feels really difficult and challenging to continue to be intentionally queer and also hold onto any traditional values whatsoever. Because the churches are catch where catch can. Either the music program is gonna be trash or they’re gonna be homophobic. And that’s just the way it is. Because I have tried, and you have tried too.

Again trying to have kids feel scary because whichever one of us is carrying the other person needs to make sure they’re in the room when the other person’s crowning or else that’s it. And we gotta be married first too to be on the birth certificate.”

TN.org: That’s actually part of the law is that you have to be in the room?

Tiffany: “If we get in front of the wrong judge it still would be an issue.”

Carissa: “And then moving past that, thinking about our kids potentially being the only kids in their class with queer parents.”

Tiffany: “We’ll figure it out.”