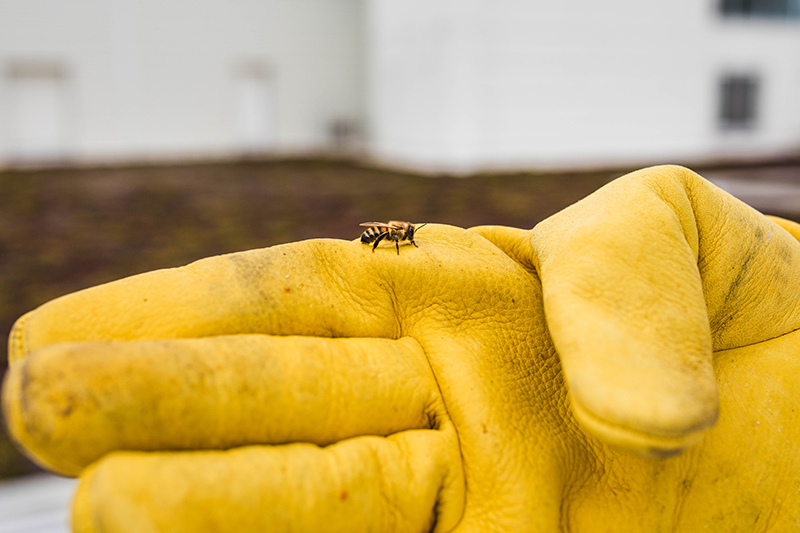 Hear the buzz? See how Bees in the D contributes to Detroit’s bee economy

In two years, a sweet nonprofit has become one of the city’s largest sustainability efforts

On a chilly day in April, Brian Peterson is wearing canvas sneakers speckled with gold-painted bumbleees. At just the right angle — it was fairly cloudy that day, but just enough of the sun broke through — the shiny gold reflects light.

The bee sneakers are themselves a reflection of Peterson’s recent obsession with the buzzy insects. In just over two years, Peterson and his husband, Brian Roest, have evolved from amateur beekeepers to in-demand professionals where two unexpected missions have converged in Detroit: The wants of eating local, and the urgency of bee conservation.

“I tell everybody I caught the bug. I describe it as my yoga, and I can’t do yoga,” Peterson says. “I’m hyper, I just can’t calm myself. But when i go in those beehives, I slow down, I become a part of this amazing world,” Peterson says.

We’re here on the roof of Cobo Center, overlooking downtown Detroit and the Detroit River, where Peterson and Roest have three beehives. They have founded a nonprofit, Bees in the D — a joke that became a brand. The couple lived in Lake Orion for years, where they established their social lives. When they moved to a condo in Rivertown, their suburban friends quipped they were visiting “the B’s in the D.”

Bees in the D — Peterson serves as educator and handles production, while Roest handles marketing and data — started in 2016 with six hives. In 2017, it grew to 29. This year, the pair is looking to have more than 70 beehives across Detroit. They can be found almost everywhere, at sites in various stages of redevelopment: the Foundation Hotel, Eastern Market, the Renaissance Center, an urban farm in Jefferson-Chalmers, the former Detroit Free Press building.

“You hear about honey being shipped from China that’s not really honey,” Peterson says. “But man, the (homegrown) honey is so good. My honey from Jefferson-Chalmers has a very floral flavor. And then our honey from the top of Cobo has a cinnamon-y flavor.”

The journey began eight years ago when Peterson, an elementary school science teacher — which is still his day job — was asked by his school district to attend a beekeeping workshop on behalf of a garden club. The garden club was interested in bringing more sustainable methods to its own practices, which included creating a healthier ecosystem for bees.

It was the actual practice of beekeeping that got Peterson hooked. Basic-level science tells us that bees are necessary to pollinate flowers, thus allowing flowers to reproduce. During the two-week crash course, Peterson learned about various species of bees and how each contributes to nature beyond spreading pollen. Certain bees thrive better in different environments, and at-risk bee populations threaten not just the spread of pretty flowers, but honey production and the industry built around it.

“We’re more about the education and about conservation of the bees and we’re more about partnerships. We love working with other small businesses,” Peterson says.

On the roof of Cobo, Peterson pulls out a wooden, rectangular frame surrounding a honeycomb. Bees — even in 40-degree weather — cling to the frame and a waxy surface beneath it. Underneath the wax is pure honey.

It’d be relatively easy to harvest and bottle honey, but  Bees in the D’s production is also centered around the wax. Candles, soaps, solid perfumes, even balm for dog paws which become irritated by salt all use beeswax. The honey that’s left is used in local restaurants — notably in drink recipes and desserts — as a means of promoting local food sourcing.

“You hear about honey being shipped from China that’s not really honey,” Peterson says. “But man, the (homegrown) honey is so good. My honey from Jefferson-Chalmers has a very floral flavor. And then our honey from the top of Cobo has a cinnamon-y flavor.”

Honey flavor is obviously tied to whatever surroundings bees pollinate. But there’s hardly any cinnamon growing in Detroit (that we know of), so Roest suspects river-dwelling bees are flying over to Windsor to pick up the flavor. If so, that’d be one hell of a cross-cultural blend.

Bees in the D joins a growing bee economy in Detroit that has been in the spotlight as of late. A combination of empty lots and unused rooftops have allowed beekeepers citywide to experiment with bee production. And folks are noticing. At Michigan State University’s school of veterinary medicine, bees only recently became included in its curriculum — something Peterson consulted on.

“I love that people are excited about helping the bees, and I love the fact that Detroit is so green. It’s opened up so many doors for us that we’ve changed our language to say we don’t live in Detroit, we’re part of Detroit, and that’s our favorite thing about this,” Peterson says.

“I think Detroit is primed for this,” he adds. “I would like to see Detroit become one of the first big cities to become a bee city.”